Skip to content scroll to discover more back to top

It behooves me to share a few tales from the road trip Swift, The Red God and myself took from New Orleans to NY. A humble enough beginning with a few nights in the city that doesn’t sleep, with people who needed to sleep, involving the usual high spirits followed by a flight to NO, into the warmth of the southland, where the livin is easy. Easier than NY, for real’s. A trip down Burbon street through the crowds who don’t know why they’re there, know they should be having a good time so keep on screaming that they are and then down onto Frenchman’s street where the locals go for a great time. Soul music in DBA, blues across the street and after that I can’t say here, you’d have to buy me a beer, but the craic was 90+.

We decided to take a trip to Clarkesdale, home of the blues, were Robert Johnson famously sold his sold to the devil for a few tracks on a wax cylinder and a poisoning at age twenty seven. Seems like a bad deal to me, can you enjoy your immortality when you’re not around? The Red God heard we heading into a tornado watch zone and was eager to test his mortal hubris against the mighty storms of the south by chasing one. We sorta went along with him. Heading north, lightning ranged the skies and occasionally, from the blackness, the flashes would silhouette what looked like a large thunderhead against the sky. The Red God knew from his research that this was what he was looking for, he started to get quieter, as did I. It was looking like a spot of trouble ahead. Cut to half an hour later and I have my eyeballs against the windscreen trying to see something, anything, as Thor unleashed a mighty stream of blinding rain, a barrage of firehoses, like being in a carwash. The lights of a truck up ahead and the reflection of the white stripes on either side kept us true, flying on instruments. I was in a strange zen state of OMG, the Red God texted his Queen to say he mightn’t be getting out of this one and Swift, while claiming to be nonplussed, unruffled, implacable even, did chew the top off of a battery during the storm,… just saying. I think we all had our own reaction to the insanity of what we drove though. Nature is more than formidable. At one point, and I swear this is true, lightning bolts hit the ground on either side of our trusty yellow ford fiesta looking like it couldn’t be more than a hundred feet away. I could feel my face tingle after the strikes and at that point was coming to some kind of terms with my maker, although down there in that situation it seemed like the other side was more approachable. The miles to the exit seemed to go on and on, an eternity, but we eventually made it to the second exit after missing the first,  a good moment between navigator and driver, and stopped at the traffic lights at a crossroads and took a moment to take a moment. The rain was still driving and the lightning flashing when Swift realised where we’d stopped, where Highway 61 meets Highway 49, the site where Robert Johnson sold his soul. Hell yeah.

The next morning the Red God looked though his pictures from the night before and went a little pale. What follows are two photos from that moment, the first is the scene as it should be and the second, spookily enough, the Red God managed to capture a bolt of lightning on film. Now for those of you who may not know this, when you see a bolt it’s the light burnt onto your eyeball, the thing itself lasts for 30 microseconds, it’s just so bright it leaves and image on your retina, like looking at a bright light. But a camera doesn’t have a retina, it just takes what it sees so the Red God managed to take his picture precisely during an event that lasts 30 millionths of a second — 30 microseconds. Freak event or a message from the man himself? 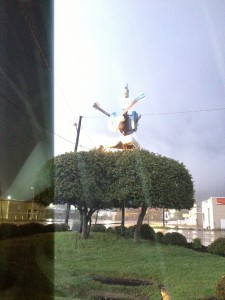 The next night as I stood outside a jukejoint, drinking moonshine from the bottle of the lady who sold me ribs while she was busy pointing out to me where Queen Bessie and King BB had walked along these dusty streets and why his guitar was called Lucille, as the blues poured out into the southern night from the boozy drinking den inside I suddenly occurred to me that those guys weren’t making things up in those songs, they were just writing down what happens here.

This site uses Akismet to reduce spam. Learn how your comment data is processed.